“This wouldn’t quite fit in our Fantasy department, and though we have a section for young people, I think this story would work better in a dedicated children’s magazine.”

“I would read the shit out of this, but I wouldn’t tell my friends I’m reading it.”

“Aww, this story has an animal in the lead. What a cute children’s story!” 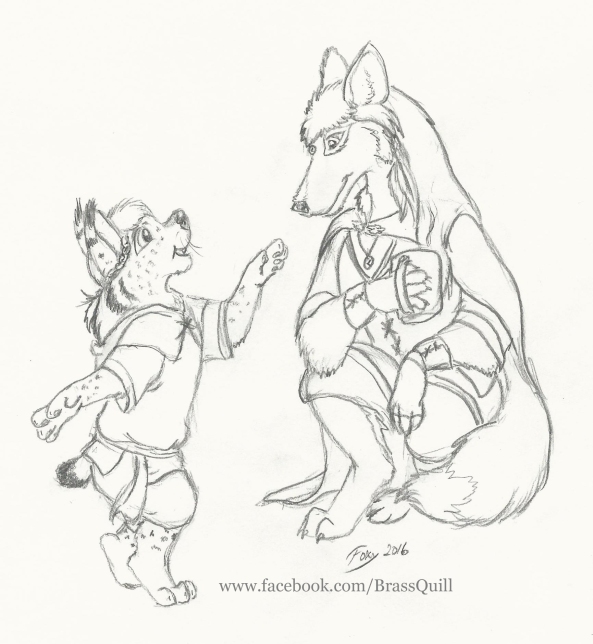 What do all of the above have in common? They are actual feedback I have received on various pieces of my writing throughout the years. They are also proof of the bane of my existence as a writer. That bane is a blanket stigma that any work that includes animals (either a real one narrating through thoughts, or anthropomorphs that walk and talk like humans) is automatically relegated to the children’s story category. Yes–there are some that have managed to get listed outside of the young readers age group, but by and large the industry and public reaction is only young readers can possibly be interested in animal MCs.

Don’t believe me? Just try searching for Anthropomorphic Adult works. Or better yet, try submitting your own attempts and see what you get.

So, let me illustrate this for those who might not see the problem. It’s like having an epic Tolkien level world building in your mind all in high tech, 3D animation software so realistic you can see the hairs on your MC’s head move! You pitch it to a movie exec and they say, “Nice work. Here’s your box of 16 crayons and some construction paper. This should be enough to make it happen. Run along and play.”

Pheonix doesn’t understand why she isn’t allowed to mature.

Ok, yes, the children’s entertainment industry is loaded with many wonderful works that adults enjoy. I am a huge fan of many of them. So why aren’t we just happy playing with our box of crayons?

Because there are limits to what you can do with younger audience pieces.

There is a material maturity cap. Sure you can push the envelope, but at the end of the day there is a line you cannot cross, and a box you are not permitted to go outside of … all because your character is not human. 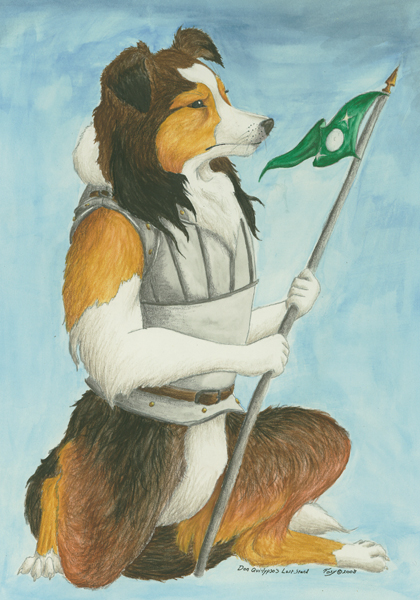 Alien? No problem! Get as adult as you like.

Werewolf? Well … that was human, so no biggie! Go for it! 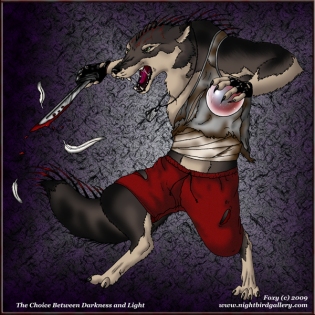 “Piss off, armor puppy! I’m a werewolf, I can say whatever the fuck I want!”

The spirit of a beloved dog becoming a sentient angel … (that was the story behind the opening remark). The unpublished short story that included a graphic description of animal abuse in the beginning–that’s just fine for a dedicated children’s lit, apparently. <facepalm>

“Sure, I get it. No adult would possibly admit to falling to shit about the loss of their pet. Ok, instead of my purpose of comforting them, I’ll go pander to the little kiddies. Just let me get my butterflies and rainbows.”

So yes, this topic seriously gets my goat as I go about creating the stories that I, as a fully mature adult, want to read.

“They said don’t go that way, it’s only for the experienced, you know, mature, warriors only. We got fur, so we need not apply. Good thing I don’t give a shit what they say! ONWARDS!”

What it basically tells me is that my preference of character is not worthy of mature material. That Animal=Immature. What’s amazingly sad is that the fantasy genre is where this seems the most firmly rooted. An odd thing when one considers that fantasy readers are pre-set to toss reality out the window. Yet the industry only rarely allows an animal-centric book to enter above the children ranks. There are a few recent ones, “The Art of Racing in the Rain” comes to mind. But these are rare gems. I have to chuckle at “Watership Down” being considered a kid’s book–which some do consider it. That is a tome of a book with a glossary with unique rabbit lingo and an entire rabbit-centric mythology going on there. I don’t buy that Adam’s wrote it for children. Nor his “Plague Dogs”, a dark exploration of the danger of pathogens. How many young readers are going to be able dissect the core of “Animal Farm”? Yes, there are some advanced reading kids, but to get the sociological core of it is not a general grade school concept.

“Annnd how may I make you cringe today?”

I can assure you that there are actually plenty of adults out there that love anthropomorphic works. They flock to the children’s stuff that makes it out there because that is all we can find! “My Little Ponies” has an astonishing adult following including aiding in bringing some adults out of the gender closet. Serious mad props there! When the “Lion King” came out there was, and still is, a massive community of adults who create art, fanfiction, and role-play stories in that realm. Many of this include deep, mature content. And by that I don’t imply smut, I mean deep philosophy that has no place in a kid’s story. There are conventions across the nation where adults spend thousands on their costumes to walk around in. These cons are on par with other media focused ones–so don’t tell me adults aren’t interested. They are, and they crave older themed works that don’t have the kid maturity cap. The stigma cap bars the way.

“What are you doing?”  “Me? Just weaving a complex message into the narrative. Nothing critical or anything.”

So why is that children will pick up a book about anthropomorphic creatures and just go with the flow. Yet, in general an adult will look at the same story and in the first paragraph get stuck on pondering how the armor wearing dog is possibly able to hold her bow without thumbs? (I get this a lot. So much so that I now ALWAYS include a THUMB reference in the first paragraph of my anthro works to help the imagination-challenged.) Why? Why doesn’t a child have a hard time getting an animal world but the adult mind resists?

I wish I knew. But I am at a loss as to why. And before it is said, this is not isolated to my own writing. This post covers common venting from other anthro writers. Our interest is on the fringe. Our interest is regarded as a marginal thing. The impression we are left with is that if we want our work to be seen, we need to make the characters human so that readers will be capable of connecting.

We need to make them human …

“I like humans. In all of the mortal realm there’s no better stew of emotions and ambitions so ripe for corruption.”

The take away from this sadly ventures into a wider scope. One that reveals a deeper problem with our society. If society only believes that children have the potential to look through different eyes and adult do not … well, ok, just look at the news. We prefer familiarity and dislike being challenged to truly look through another’s eyes. Writing is the perfect medium for us to explore other perspectives, and yet there is a caution not to stray too far from the norm. Removing the potential for something more mature because of an MC choice is on par with the frustration of those who try to write a non-child’s story staring a child, or a non-YA featuring a teen. These are unfair leaps of logic. A child can be the star of an adult story–try to market one and see how hard THAT is. If you see humans as merely another animal and thus animals are not that different after all … you tread a very difficult path that the general human ego is not willing to swallow!

Well, guess where I dare to tread! I sharpen my word axe and prepare to cut my niche nice and deep because I know that the voices of my characters have value and worth maturity. Some have found homes, some have yet to be seen as valuable contributions. But in the end I refuse to make the something they are not. Human.

Anthropomorphic, don’t be afraid to see outside of your species box. That level of empathy is important, especially within your species in an age with such social disparity.

Are you ready to see through the eyes of something else? When you are, I’ll be waiting.